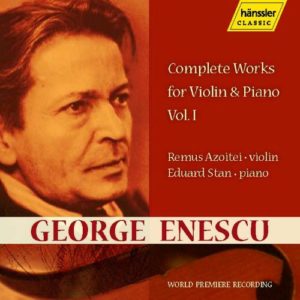 Performances in recent years have brought the duo to Edinburgh and the World Expo Milano 2015, followed by a tour in 2016 including the London Menuhin-Festival, the Palais Béhague in Paris, Gödöllö Castle in Budapest and Fulya Sanat in Istanbul.

They are celebrating 20 years of collaboration through numerous performances in the season 2019-2020, including in London, Stockholm, Warsaw, Nicosia and Tokyo, among others. They will also perform a concert in New York at Carnegie Hall.

A milestone in the impre-ssive career of the duo represented the recording of the first ever entire repertoire for violin and piano by George Enescu, launched by Hänssler Classic on 2 CDs in 2007. 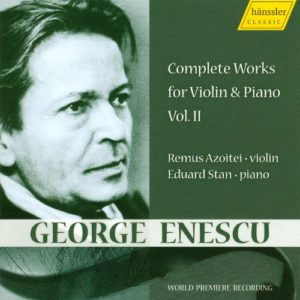 This collection not only attracted international acclaim, but furthermore it was immediately regarded as a model of interpretation of the genius‘ Enescu sublime music. In terms of musical ambassadors also representing Romania on many diplomatic occasions, Azoitei and Stan are nowadays considered as their homeland‘s most outstanding duo in the field of classical music.

With their soulful playing, Eduard Stan (piano) and Remus Azoitei (violin) are at home on the stages of the world. On Thursday, they ravished the audience to ovations in the sold out Zedernsaal… The balance between the high-pitch string instrument and the quite warmly coloured sound of the Bösendorfer was just perfect.
Read full review

The two artists of the evening, violinist Remus Azoitei and pianist Eduard Stan, have subjugated the audience with their sensibility rich in colours and nuances, as well as their irresistible vitality and profound approach. This was one of those rare recitals
where romanticism, folkloric character and virtuosity meet together in harmony, in order to create that cathedral of sounds that lifts us towards the peaks of music.
Read full review

These two estimable artists… Azoitei was exploring every facet of tone…Eduard Stan still put out an impressive volume when required.
Read full review

Both sonatas are brilliantly, perceptively and subtly played… Every detail is caught to perfection.
Read full review

In a hypnotic account of the Third Sonata, Azoitei and Stan demonstrate complete empathy with the quasi-improvisatory nature of the writing. Superb playing also in the Brahmsian First Sonata.
Read full review

Where this new account scores is in the sensitivity with which Azoitei and Stan suffuse poetic means with musical-ends, sustaining the work’s inevitability through to its powerful closing chords. An enthralling reading of a vital masterpiece.
Read full review

This latest season got off to an impressive start with a recital given by Remus Azoiţei and Eduard Stan. The often intuitive interplay between the two musicians was undoubted…
Read full review

Incandescent reading that positively bursts forth with energy from this genuine musical partnership. Azoitei and Stan believe in this music wholeheartedly and convey its various aspects with such apparent ease that I find it impossible not to be totally carried along by it. They perform with rare distinction…
Read full review

Azoitei and Stan combine temperament, mastery of idiom and executive elegance in a very special way. They shape the music beautifully, so that what in some hands sounds like mere extended improvisation (a desirable attribute admittedly) also parades discernable form.
Read full review

The recital opened with Enescu’s superb Impressions d’enfance of 1940, so rarely heard but more than deserving of resuscitation, the more so in what members of the audience regarded as such a fine account as this. Brahms’s late D minor Sonata followed, also much appreciated by the audience… These were magnificent performances… Clearly, a memorable evening.
Read full review

Azoitei and Stan released an exemplary two-disc set… and the musicians’ long collaboration made for an easy rapport in performance.
Read full review